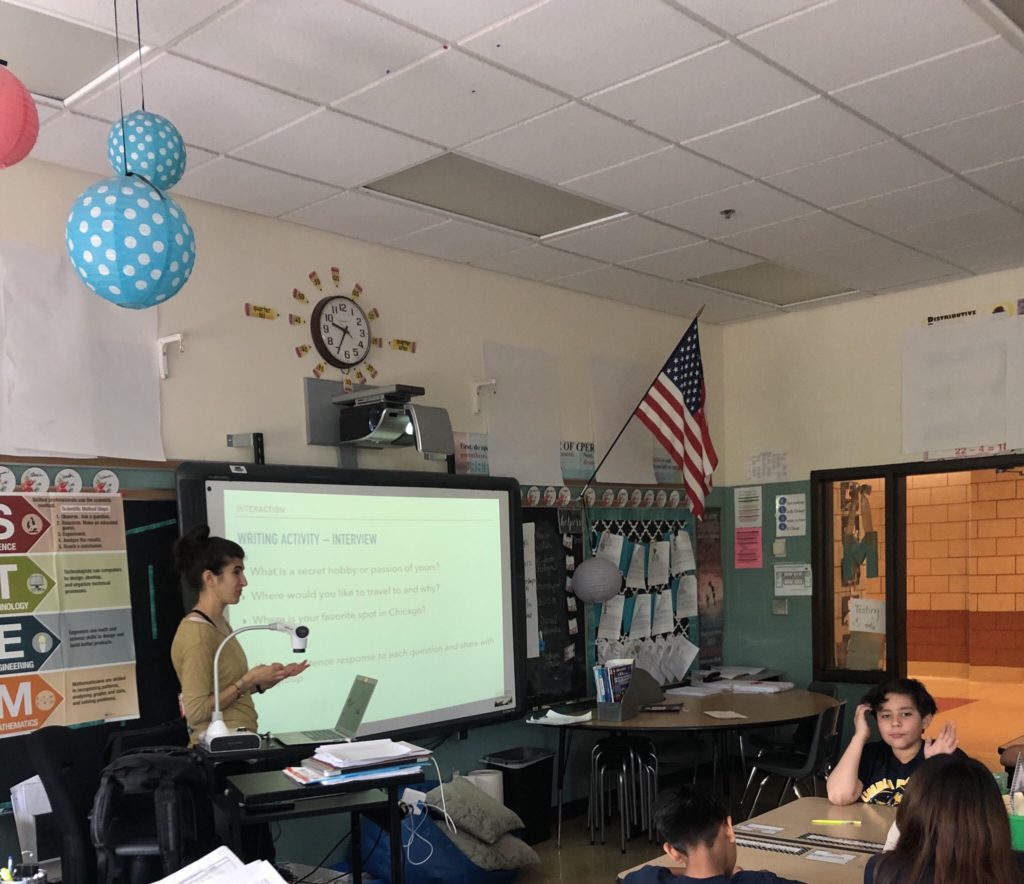 On a warm summer morning — Thursday, June 6, to be exact — I got up early, prepared my best, yet comfortable professional outfit and ate an apple for breakfast. I made an hour-long commute to Brighton Park to give my first Career Day presentation to students at Columbia Explorers Academy, an opportunity presented to me as a board member of the Chicago Journalists Association.

Columbia Explorers Academy has been holding Career Days for the past 15 years, and this marked the second year that CJA sent its members to educate future generations on the life of a journalist.

Admittedly, I was nervous to share my career advice with little humans who probably hadn’t even thought of high school yet. But after gathering some advice from our vice president and my various jobs, I got to work and put together a presentation that elementary school students would want to hear.

Shortly after 9 a.m., I was led by two students into a chatty fifth grade classroom. The teacher and all of the kids greeted me and smiled; I had never been around this many kids before. I felt their attention and energy, so I quickly focused and started to tell my story.

I told the students about the power of writing and using expression to tell stories, whether they be fiction or non-fiction. I also talked about skills that are important in journalism: interviewing, editing, pitching, proofreading. When I asked the students what they thought a journalist did, they were all accurate and excited to tell me their thoughts.

“They write,” one person said.

“They talk to people,” another said.

One student even said, “They talk on the radio.”

I was pleased to hear these answers, since I initially was not sure what fifth-graders would know about the industry.

When I was 10, I remember listening to NPR and trying to read National Geographic. That’s mostly thanks to my parents, who always had the news playing on the radio, and my own curiosity to learn about the world and write about my experiences. I asked the students how they consumed news, and some said NPR and the radio. My heart fluttered a bit!

After telling the class about my many jobs and the benefits of each, I gave them a writing exercise to test their knowledge and interviewing skills. They chose a partner and interviewed each other, asking deeper, open-ended questions. They really got into this. And while there were some who weren’t quite engaged and did not want to write more than a sentence, others wrote paragraphs.

We then talked about the experience, and almost every student shared what they learned about their partner. It was fun to watch their excitement while interviewing, taking notes and learning.

But my favorite part was the last activity. I asked what journalism topics they would want to write about, why they wanted to write about it and who they would interview. It was a tough question that I wasn’t sure they would grasp, but I was pleasantly surprised by what I heard.

A mostly Latino class, the students wanted to write about immigration and tell President Trump that Latinos are coming here for a better life, not bringing bad things to the U.S. They want to visit their families in other countries and help them with financial, housing and other needs. This was so touching, and I was impressed to hear that they’re engaged in current issues like immigration.

One student named Axel — who seemed like the class clown but showed off his smarts with lots of comments and questions throughout the presentation — said he would want to write a story about crime in the neighborhood.

“There is a lot of violence in the area,” Axel said. “I would talk to the police and people around to see how we can stop the violence.”

I thought this was an insightful observation for a 10-year-old and applauded his answer.

When it was time to head over to the neighboring classroom, I said “adios” to the students, and they presented me with a handmade thank you card. I had never seen so many people write my name and express thanks. It was by far the best part of Career Day! I was glad to know that these kids enjoyed what I offered and thanked me for my time.

After my presentation in the next classroom, the students got creative and asked me a few questions!

“Have you ever interviewed a celebrity? Demi Lovato? Selena Gomez? What about Trump?”

“Have you ever flown on a plane to interview someone?”

“Have you interviewed someone in prison before?”

The last question was the most shocking by far. Their curiosity amazed me.

Looking back on Career Day, it was a thrilling and positive experience. I would definitely do it again! I hope the students learned as much from me as I learned from them. Putting my story out there helped me remember the importance of journalism, the benefits of freelancing and being part of journalism organizations like CJA!

CJA is one of Chicago’s oldest journalism organizations and a 501 (c)(3) nonprofit organization. Membership is free for aspiring, current and retired journalists of Chicago’s editorial departments. To become a member, send a CV/bio to chicagocja@gmail.com.