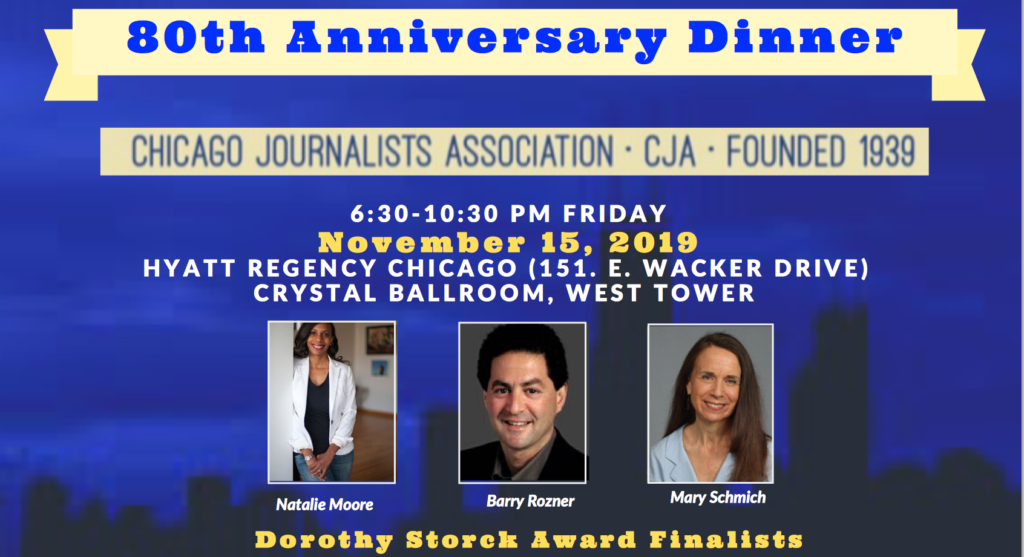 The award is named for the late syndicated newspaper columnist and Pulitzer Prize winner who passed in August 2015.

A longtime member of the 80-year-old CJA, Storck’s family and her fiancé, University of Illinois at Chicago Political Science Professor Dick Simpson, in 2017 established the annual award to honor a Chicago area Print, Broadcast or Digital columnist sharing Storck’s dedication, impact and commitment to craft.

This year’s Dorothy Storck Award, for best News or Features column published July 2018 to July 2019, will be presented at the awards dinner, where Chicago native and 12-time Emmy Award-winning ABC 7 Chicago Anchor/Reporter Cheryl Burton, who helms two of the #1 rated newscasts in Chicago, will receive this year’s Lifetime Achievement Award.

Honored by DePaul University this year with the Distinguished Alumna Award for work that embodies the highest principles of journalism, Duarte started her journalism career as a reporter for Telemundo Chicago, going on to work in news markets throughout the country, including Miami, Indianapolis and Detroit before becoming one of WGN’s top investigative reporters.

Special guest Chaz Hammell-Smith Ebert, CEO of Ebert Digital LLC, will offer an “In Memoriam” tribute. The wife of the late famed movie critic Roger Ebert is publisher of the movie review site Rogerebert.com; produces television and movies, and heads the Ebertfest film festival, now in its 21st year at the University of Illinois at Urbana-Champaign.

A graduate of the Chicago Public Schools’ Crane High School and DePaulUniversity College of Law — both beneficiaries of Ebert scholarships — the civil rights attorney is president of the Roger and Chaz Ebert Foundation; life trustee of the Art Institute, and member of the Alliance of Women Film Journalists. Her work focuses on programs to help break the glass ceiling for women and people of color, and provide education and arts for women, children and families.