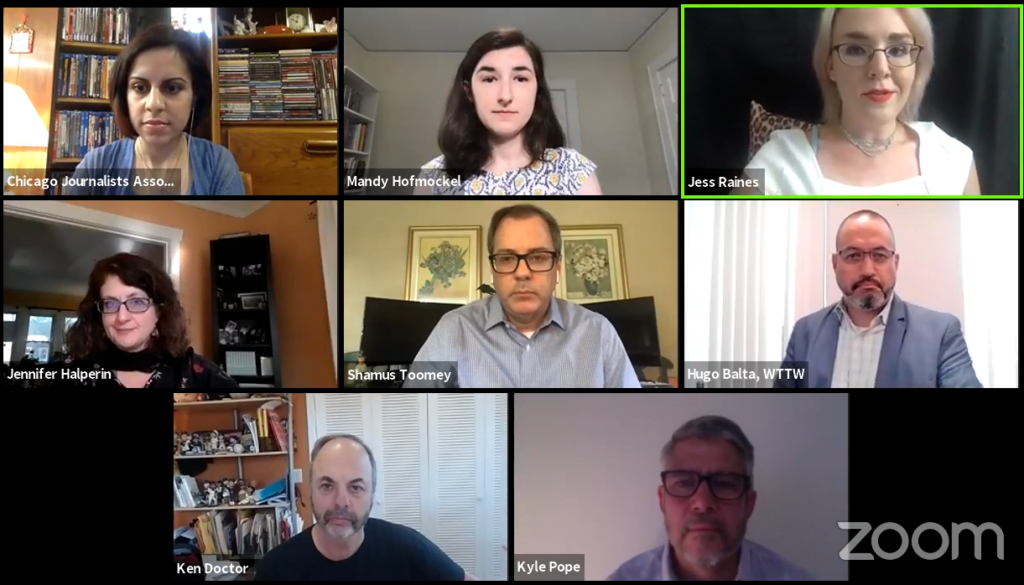 For the first time in its 81-year history, the Chicago Journalists Association hosted a virtual panel discussion on Tuesday, June 30 that assessed the outlook of journalism jobs to an audience of veteran and aspiring journalists across the globe.

The important discussion took place as the COVID-19 pandemic has proven to be one of the biggest economic hits that media outlets have ever faced. As of May 1, the New York Times reported that 36,000 employees of news media companies in the U.S. have been laid off, furloughed or had their pay reduced since the first virus case hit the U.S. in January. And some suggest that the news industry may have been more gravely affected than other industries.

The panel featured the following news industry experts to weigh in on this timely topic:

Mandy Hofmockel, Publisher of the newsletter, “Journalism Jobs and a Photo of My Dog”

State of the Industry

When asked about the future of journalism jobs for the next several months, the panelists expressed similar sentiments: Look ahead to 2021. As Hofmockel compiled her weekly newsletter at the beginning of the pandemic, she found herself “scraping” to find journalism openings. She had not seen a drought like this in the 2 ½ years that she has been issuing her newsletter.

While some positions have re-emerged since then, she worries that the pandemic could potentially drive many talented journalists out of newsrooms.

“I think the jobs outlook for the rest of the year is going to be pretty rough, just to put it mildly,” she said.

While he thinks journalism’s long-standing business model is “badly” broken, he said the solution is already out there: better serve readers in a unique way and ask them to pay for a subscription. He noted how this method is already working for publications, such as The New York Times and The Star Tribune.

“That is the primary route forward in rebuilding this business model,” he said. “And it’s happening. It needs to happen faster.”

Similarly, Pope thinks news organizations overall have failed to properly communicate why their work is important and worth readers’ money. A March New York Times article reported that U.S. news sites saw a nearly 58 percent increase in new subscriptions as the coronavirus began to surge across the country. But Pope’s experience paints a rather different picture. He is aware of very few news outlets that are successful with reader subscriptions.

“There’s obviously a mismatch between what we’re doing and what people want and need,” he said. “And so that’s really where people’s energy should go.”

He encourages newsroom leaders to ask fundamental questions about what they are offering readers and what makes it valuable enough to charge a fee.

For startup neighborhood news website Block Club Chicago, Toomey and his team knew their value from the get-go. After the award-winning digital news site DNAinfo Chicago was shut down in 2017, readers missed their local coverage and expressed interest in a similar subscription site. The Block Club founders quickly set up a Kickstarter page and surpassed their goal in three hours. By the end of the month, they secured roughly 3,000 paid subscribers and are now up to about 13,000 after two years of operation.

Block Club has since established itself as a trusted local news source. Toomey said readers come to them for answers they cannot get from government officials and resources, especially since the pandemic hit.

“We’ve been doubling down on explainer pieces and fact-checking and debunking some of the garbage that’s getting shared on social media,” Toomey said. “And we’ve seen our traffic double.”

With this increase in news consumption and the inability of larger news outlets to properly cover local communities, Balta added that this is not the time to contract budgets and cut journalists from newsrooms. But he acknowledged that such choices are sometimes made so news organizations can continue operating.

“My experience has been … that those types of decisions are short-sighted and often are detrimental, not only to serving the public but to the business as well,” he said.

Unlike many news organizations across the country, Balta and his team managed to hire a digital news reporter at the height of the pandemic. He saw a need for the position prior to COVID-19, and it only became more apparent. He said the investment increased numbers on WTTW’s website and viewership on the station’s flagship news program, “Chicago Tonight.”

So, where is the greatest need for journalists right now? Many panelists agree on local news and environmental and health reporting. Balta believes newsrooms must do a better job of investing in diversity, equity and inclusion. He explained that news has become irrelevant for many consumers over the past 10-20 years because they are not seeing themselves represented in the coverage or the people delivering it.

Doctor added that reporters are specifically needed in sub-metro areas across the country. He noted how the local newspaper in Santa Cruz, California only has two reporters, while the local paper in Ithaca, New York only has one.

And where can one find available positions? Hofmockel recommends checking journalism job boards — such as Journalismjobs.com, Poynter, Media Bistro and LinkedIn — and following related hashtags and accounts on Twitter. Some examples include #journalismjobs, #journojobs, #mediadiversity, the Writers of Color, Ida B. Wells Society and Society of Professional Journalists’ Freelance Community. She also suggests subscribing to jobs-related newsletters, checking news outlets’ websites and exploring affiliate journalism groups (ex. The National Association of Black Journalists and National Association of Hispanic Journalists).

Halperin recommends looking into trade publications and other opportunities within business journalism. She has sometimes found more jobs in these areas than in general interest publications.

“I’ve seen many students and grads over the years start out in a very specialized role, for example at a trade publication in a field that they previously didn’t have a lot of expertise, and be able to broaden where they go from that,” she said.

In the meantime, panelists encourage journalists of all skill levels to continue writing; gain expertise in a chosen topic; explore training courses, such as LinkedIn Learning; and stay curious.

“I just crave curious reporters,” Toomey said. “It’s one of the ultimate traits that I look for in people.”

To learn more about the outlook of journalism jobs during the COVID-19 era, watch the full discussion here.

CJA is Chicago’s oldest organization of journalists and a 501 (c)(3) nonprofit organization. As journalists navigate these challenging, uncertain times, CJA is offering free membership for aspiring, current and retired journalists of Chicago’s editorial departments. To become a member, send a CV/bio to chicagocja@gmail.com.