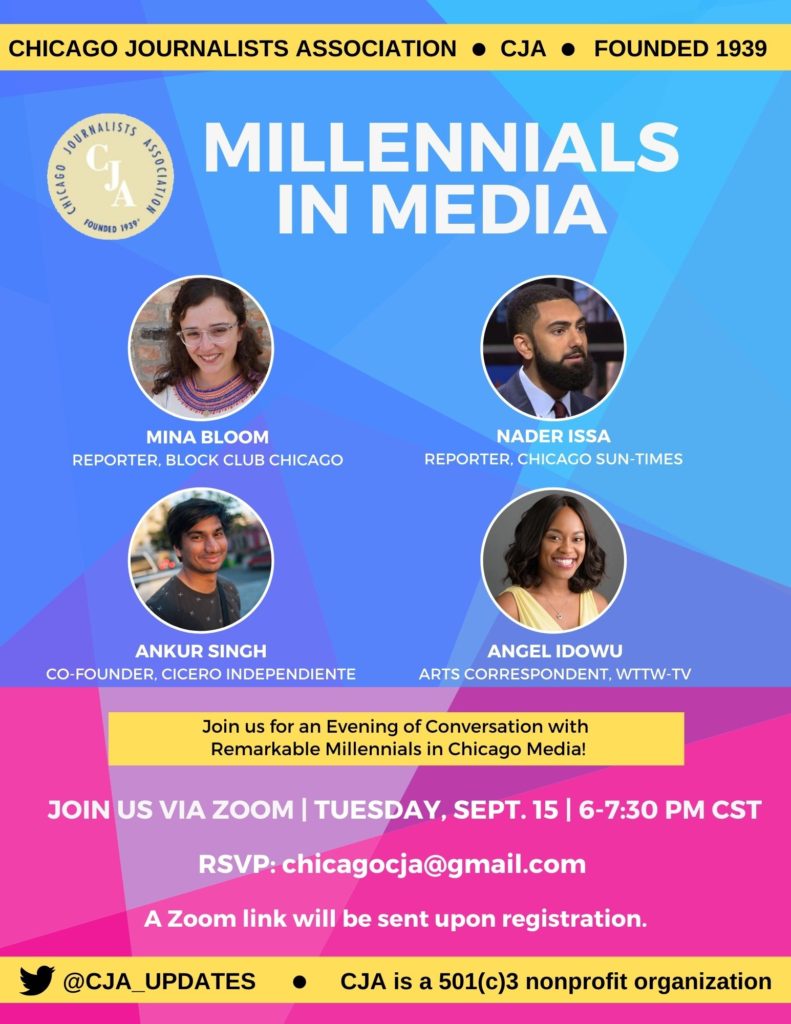 The Chicago Journalists Association will be hosting its next virtual panel discussion, “Millennials in Media,” on Tuesday, Sept. 15, 6-7:30 p.m.

The event will highlight Millennials who have carved a unique path in Chicago media, covering a diverse range of opportunities that — despite the rumors — still exist on the media landscape, from legacy newspapers, television and radio news, to digital startups.

RSVP required to chicagocja@gmail.com. A Zoom link will be sent upon registration.

Learn more about our panelists:

Mina Bloom: Bloom is a reporter for hyperlocal news website Block Club Chicago, covering Logan Square, Humboldt Park and Avondale. Before Block Club, she reported for its predecessor, DNAinfo. Her work has appeared in the Chicago Sun-Times, Chicago Magazine and Belt Magazine.

Angel Idowu: Idowu is Arts Correspondent for WTTW-TV’s news show, Chicago Tonight. Prior, she was an evening producer and weekend reporter for WJTV-12, a CBS affiliate in Jackson, Miss. She received her Master’s in Journalism from Northwestern University’s Medill School.

Nader Issa: Issa has been a reporter for the Chicago Sun-Times since 2017, lately covering education. He has previously reported on everything from crime, police shootings and high-profile court cases to sports and Chicago alligator hunts. Issa is president of the Asian American Journalists Association’s Chicago chapter and co-chair of the Sun-Times Guild, the union representing the paper’s newsroom workers.

Ankur Singh: Singh is a storyteller based in Cicero, Illinois and interested in telling stories for and with long-standing communities. In addition to being a documentary filmmaker, he is a co-founder of Cicero Independiente, a hyperlocal news outlet in his neighborhood, and works as a digital communications specialist for a labor union in Chicago.