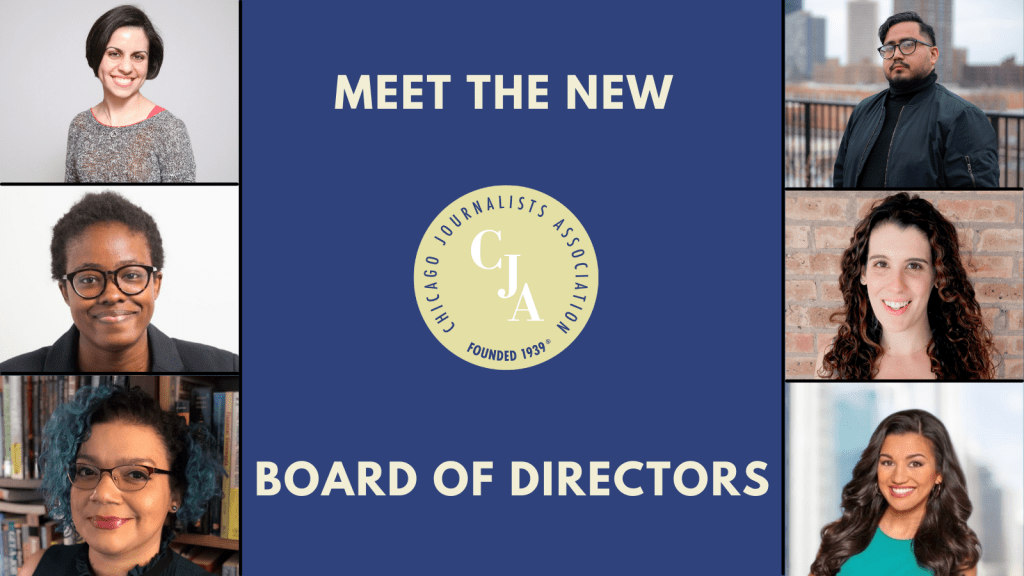 Hello again, Chicago journalism community! We’d like to introduce you to our new Board of Directors, who will be serving you from 2021-2023. Please take a moment to learn about each of them below. We’re honored and excited to work with these talented and hardworking individuals!

Stephanie Choporis is a multimedia journalist who has been telling stories across the Chicago area for nearly a decade.

In 2014, she joined the Chicago Journalists Association as the inaugural Associate Board Chairman, a committee specifically geared for college students and recent graduates. During her four years in this role, she grew the board to roughly 15 directors, organized journalism events/workshops and regularly contributed articles for CJA’s website. She also launched the organization’s Facebook and Twitter pages and organically grew them to several hundred followers. In 2018, she was promoted to Vice President/Secretary.

Aside from CJA, she served as the co-founder and managing editor of Happenstance, a mobile app that aimed to share little-known mini-podcasts about the people and places in the city, from 2015-2020. While there, she oversaw the production of 80 mini-podcasts and handled all company communication. Happenstance was named one of four Tech + Apps finalists at the RedEye’s 2017 Big Idea Awards and voted a top exhibiting startup at Chicago’s 2018 FUND Conference. She is currently a freelance writer in Chicago.

Executive Board of Directors

Rachel Hinton is the chief political reporter at the Chicago Sun-Times, where she has also covered Cook County government and the county’s Democratic Party. She graduated from DePaul University in 2017 with a bachelor’s degree in Journalism.

Jillian Melero is a multimedia journalist and the associate digital editor/producer for WTTW News, including “Chicago Tonight.” She’s worked as a science communicator and energy reporter for Climate Central, an independent science and news organization. Her work has also been featured by the Bulletin of the Atomic Scientists.

Getting her start in South Florida as a student journalist and print editor, Jillian has reported on the environment, infrastructure, climate change, energy technology, and policy in the U.S. and abroad since 2016. She earned her master’s degree in Journalism, specializing in health, environment, and science reporting, from Northwestern University in 2019. She’s also a mentor with the Latinas in Journalism Mentorship Program, which launched October 2020.

Jesus J. Montero is a multimedia journalist and community reporter at Cicero Independiente, a hyperlocal news outlet covering Cicero, Illinois. He graduated from DePaul University with a master’s degree in Journalism, Media, and Communications. The Chicago native is a first-generation college graduate and a recipient of the 2019 Facebook Journalism Project Scholarship.

Jesus was previously an investigative researcher at NBC Chicago and Telemundo Chicago as well as a fellow at NBC News for Dateline.

Jamie Friedlander Serrano is a Chicago-based freelance writer and editor. She writes about a variety of topics but has a particular interest in mental health. Her work has been published in The Washington Post, New York Magazine’s The Cut, VICE, Glamour, the Chicago Tribune, Business Insider and Inc., among other publications. She has profiled everyone from Dr. Oz and Marie Forleo to Sophia Amoruso and Jennifer Hyman. She received her master’s degree from the Medill School of Journalism at Northwestern University and her bachelor’s degree from New York University.

Courtney Sturgeon is a professional storyteller and the founder and CEO of The Resume Reporter, LLC (“RR”), a multimedia production company producing original content for job seekers, executives, and industry leaders looking to elevate their personal brand.