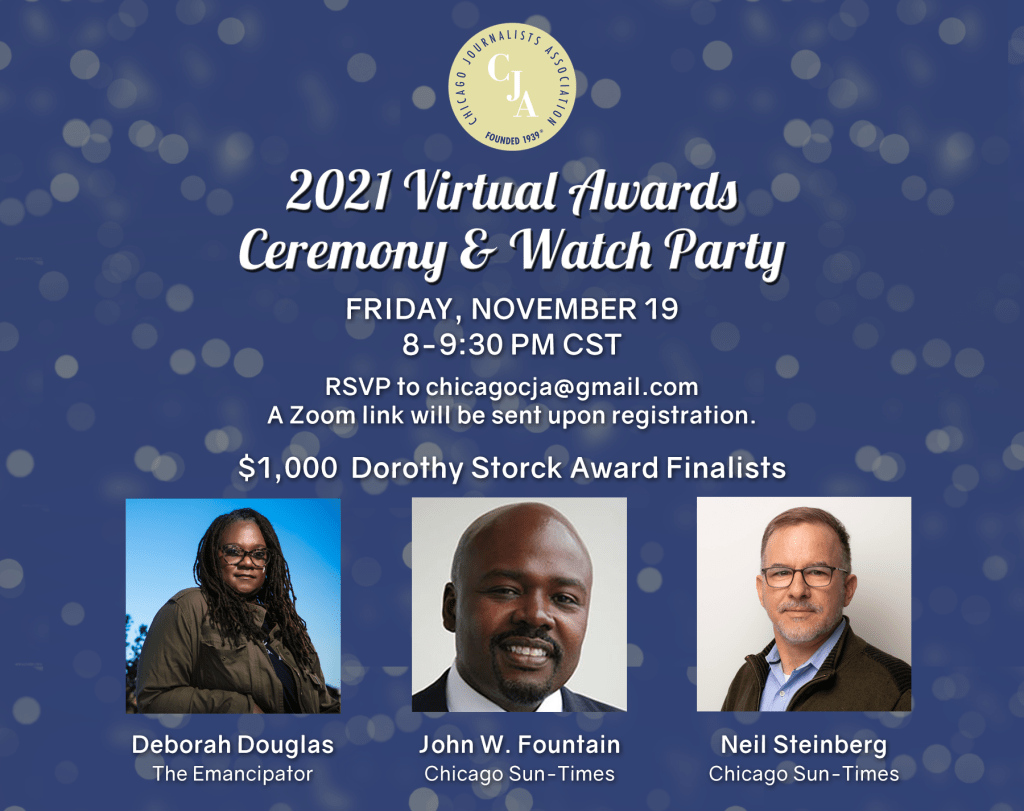 Columns by the three were considered the best of this year’s entries by judges with the USA Today network and Florida Atlantic University. Douglas, a 2018 finalist for the Storck Award, is being recognized for work published in Gateway Journalism Review, Zora and The Washington Post. Fountain is a weekly news columnist for the Chicago Sun-Times. Steinberg, also a news columnist, is a 34-year veteran of the Chicago Sun-Times.

Only one will take home the $1,000 prize at CJA’s 2021 Virtual Awards Ceremony and Watch Party, being held FRIDAY, NOVEMBER 19, streaming live via Zoom from 8-9:30PM CST. For FREE virtual tickets, RSVP to: chicagocja@gmail.com. A Zoom link will be sent upon registration.

The Dorothy Storck Award is unique in that unlike other award competitions, it annually honors two second-place winners, as the work of these journalists is too critical to judge slight differences in style.

winner who passed in August 2015, the monetary prize honors the best of the best in commentary/op-ed. The family of the longtime CJA member and her partner, University

award in 2017 to honor a columnist sharing Storck’s dedication, impact and commitment

Headlining the Nov. 19 ceremony will be keynote speaker Jennifer Lyons, president and general manager of CBS Chicago. Lyons joined CBS from NewsNation, where she previously served as the vice president of news, overseeing the creation and launch of the national cable news outlet.  Under her leadership, daily newscasts and various digital products were created, delivering unbiased national news programming 24-7.

For nearly two decades prior to that, Lyons held several leadership positions at Chicago’s WGN-TV — including Director of News and Content (2014-2020); Assistant News Director (2008-2014); and Executive Producer of the WGN Morning & Midday News — positioning the station to produce more local news than any other Chicago television station.

Lyons is a recipient of Chicago/Midwest Emmy and Silver Dome awards. In 2017, she was named News Director of the Year for Broadcasting & Cable Magazine and the most powerful woman in Chicago journalism by media blogger Robert Feder. She will provide perspective on the current state and future of Chicago’s journalism landscape.

Bauer will be recognized for her prolific body of work and noteworthy March 2021 investigation that unveiled how an executive with the West Side’s Loretto Hospital was inappropriately administering highly desirable vaccine doses to non-eligible recipients through a “VIP” vaccination event.

Also being honored are 14 winners of the Sarah Brown Boyden Awards, selected as the best work this year in categories that range from arts and features to investigations, photography and sports. One of those 14 winners will take home a $500 prize awarded to the best of the best. Finalists will be announced next week.

Douglas is co-editor in chief of The Emancipator and author of the award-winning “Moon U.S. Civil Rights Trail: A Traveler’s Guide to the People, Places, and Events That Made the Movement” (Moon Travel, 2021) — the first reported travel guide to follow the officially recognized civil rights trail in the South. She has served as the Eugene S. Pulliam Distinguished Visiting Professor of Journalism at DePauw University, founding managing editor of MLK50: Justice Through Journalism and a senior leader at The OpEd Project, amplifying underrepresented voices in the public conversation through commentary and beyond.

Fountain is an award-winning columnist, journalist, professor, publisher and author of “True Vine: A Young Black Man’s Journey of Faith, Hope and Clarity”; and “Dear Dad: Reflections on Fatherhood.” Born and raised on Chicago’s West Side, he writes a weekly Sunday column for the Chicago Sun-Times.

As a journalist, Fountain has chronicled the story of murder for 30 years, mostly in Chicago. He has also been a reporter at some of the nation’s top newspapers. In addition to national correspondent for The New York Times, he was a staff writer at The Washington Post and the Chicago Tribune, where he was once that newspaper’s chief crime reporter.

Steinberg has been a veteran of the Chicago Sun-Times since 1987. Before starting his daily column in 1996, he served on the editorial board for five years. He has also contributed freelance pieces for a variety of publications, including Esquire, Rolling Stone, Sports Illustrated, The Washington Post and has had his cartoons published in The New Yorker. The author of nine books, his most recent, “Every goddamn day: Neil Steinberg’s Chicago” is being published in 2022 by the University of Chicago Press.

The 82-year-old CJA annually recognizes excellence in journalism within Illinois and Northwest Indiana through several prestigious award competitions — including the Lifetime Achievement Award, Daniel Pearl Award and Dorothy Storck Award. The event is regularly attended/viewed by senior leadership, veteran reporters, columnists and editors at regional news outlets, along with political and civic newsmakers.

Join the Chicago Journalists Association for this annual celebration, where we will hear from Lyons, Tucker, Bauer and the Dorothy Storck Award finalists, and find out the winners of the $1,000 Dorothy Storck Award and $500 Best of the Best Award in the Sarah Brown Boyden competition.