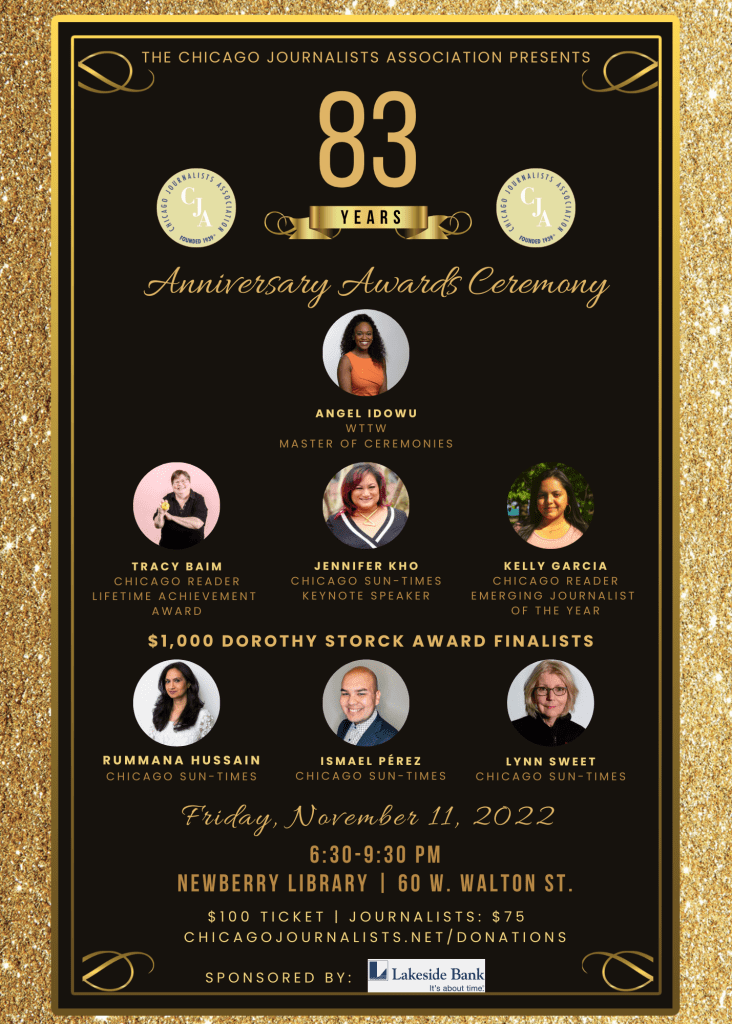 (CHICAGO)— President and publisher of the Chicago Reader, Tracy Baim, will receive the 2022 Lifetime Achievement Award, and Chicago Reader staff writer Kelly Garcia will be recognized as Chicago Emerging Journalist of the Year at the Chicago Journalists Association’s (CJA) annual awards ceremony, the organization announced Monday.

As one of the oldest organizations of journalists in Chicago, CJA will be presenting its 83rd Anniversary Awards Ceremony on FRIDAY, NOVEMBER 11, from 6:30-9:30 p.m. in Rettinger Hall of the Newberry Library, 60 W. Walton St. Tickets are $100 for non-journalists and $75 for journalists. Payments can be made at https://chicagojournalists.net/donations.

CJA’s Lifetime Achievement Award annually honors an Illinois journalist exemplifying the highest levels of career achievement, courage and tenacity. Winners additionally personify the age-old journalistic mantra of using their gifts of pen and microphone to provide a voice for the voiceless.

This year’s Lifetime Achievement Award will be presented to Baim, whose career spans nearly four decades in community media. The co-founder and former publisher of Windy City Times has won numerous LGBTQ community and journalism honors, including the 2013 Chicago Headline Club Lifetime Achievement Award, 2005 Studs Terkel Award and inductions into the NLGJA: The Association of LGBTQ Journalists Hall of Fame and the Association for Women Journalists-Chicago Chapter Hall of Fame. Baim attended Lane Tech College Prep High School before earning her Bachelor’s in journalism at Drake University in Des Moines.

Baim was hired in late 2018 to save the storied Reader newspaper, which was facing imminent closure by then-owner, the Chicago Sun-Times. During her tenure, she has doubled the Reader’s staff, established the Reader Institute for Community Journalism and guided the paper through a tumultuous transition to nonprofit status. Along with former co-publisher Karen Hawkins, she is credited with bringing stability and innovation to the Reader as well as reviving its tradition of investigative journalism.

After a highly-anticipated return in 2021, CJA will once again honor an individual with the coveted title of Chicago Journalist of the Year. While the award recognizes a local journalist who has produced exemplary work, this year’s award features a slight twist — honoring a journalist who is just beginning a very promising career. Kelly Garcia, a staff writer at the Chicago Reader’s new Racial Justice Reporting Hub and Writer’s Room, will receive the title of Chicago Emerging Journalist of the Year.

A bilingual investigative journalist, Garcia has covered police, politics and racial injustice at the alt-weekly newspaper. Prior to joining the Reader in 2021, Garcia freelanced for a variety of news publications in Chicago, including The TRiiBE, South Side Weekly and The Daily Line. She’s a former Civic Reporting Fellow for City Bureau and Summer Reporting Resident for Injustice Watch.

She will be recognized for her reporting on Riot Fest and other mega music festivals and their impact on Douglass Park and West Side residents — often underrepresented voices that have long made up Chicago’s fabric. As the sometimes sole reporter covering related community meetings, her persistence brought to light various issues, including damaged park grounds and concerned neighbors.

Garcia also proved to be a strong voice throughout the Reader’s transition to nonprofit status, demonstrating great passion for her publication, readers and city. Earlier this year, she was a recipient for Ascend Justice’s 2022 Champion of Justice Award for her persistent coverage on allegations of misconduct by the former presiding judge of Cook County’s domestic violence court.

A longtime member of the 83-year-old CJA, Storck’s family and her partner, former University of Illinois at Chicago Political Science Professor Dick Simpson, in 2017 established the annual award to honor a Chicago area print, broadcast or digital columnist sharing Storck’s dedication, impact and commitment to craft.

Also being honored at the awards ceremony are 18 winners of the Sarah Brown Boyden Awards, selected as the best work this year in categories that range from arts and features to investigations, photography and sports. One of those 18 winners will take home a $500 prize awarded to the best of the best. Sarah Brown Boyden Award finalists will be announced the week before the awards ceremony.

Join the Chicago Journalists Association and an audience of local purveyors of journalism for this annual celebration, where we will hear from Baim, Garcia and the Dorothy Storck Award winners.

The Chicago Journalists Association is a nonprofit organization boasting a storied membership of active/veteran print, broadcast and digital journalists, media and communications professionals, associated journalism educators and college journalism students in Illinois/Northwest Indiana. CJA’s core mission is the advocacy and rewarding of journalistic excellence through prestigious journalism award competitions; professional development of our members through ongoing training and newsmaker forums on industry issues; and support and mentoring of the next generation of journalists, through scholarships.