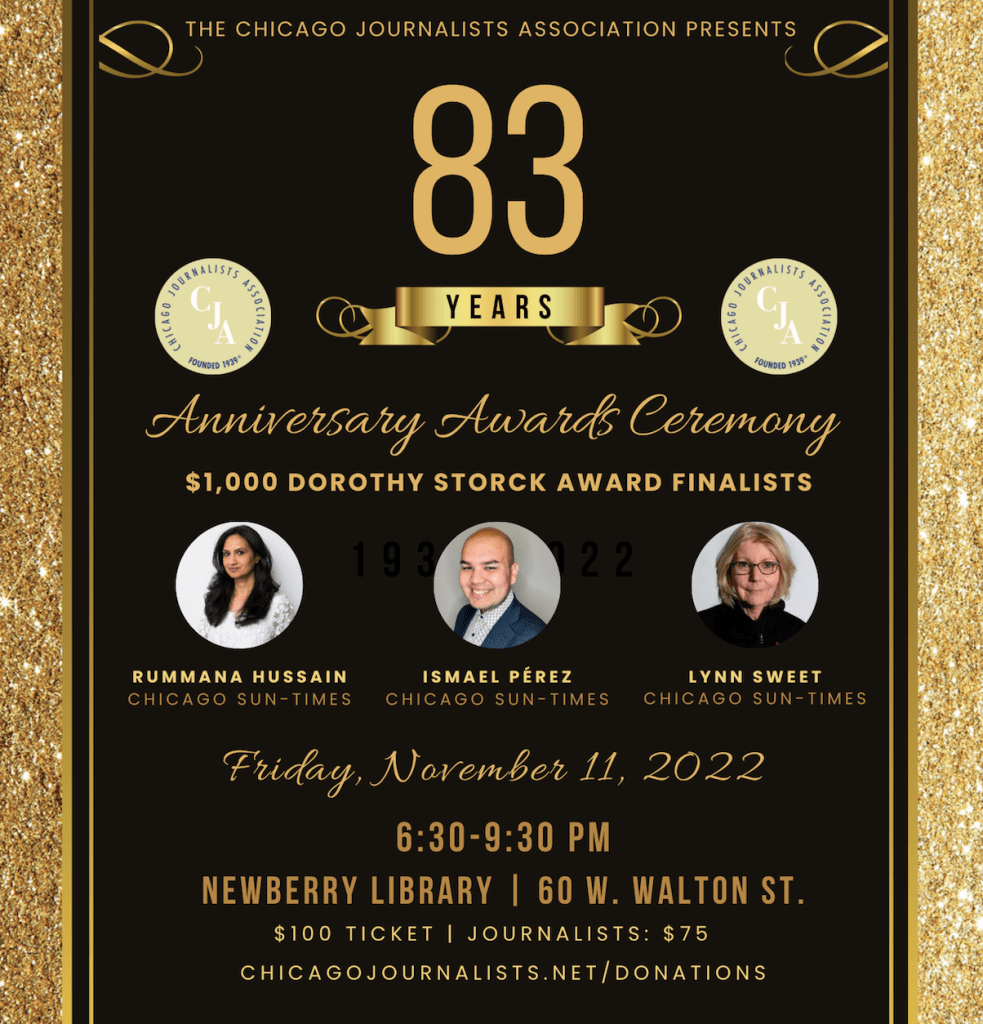 Columns by the three were considered the best of this year’s entries by judges with the USA Today network. All three are being recognized for columns published in the Chicago Sun-Times from 2021 and 2022. Hussain and Pérez are editorial board members at the daily publication while Sweet is the paper’s Washington Bureau Chief.

The Dorothy Storck Award is unique in that unlike other award competitions, it annually honors two second-place winners, as the work of these journalists is too critical to judge slight differences in style.

Named for Dorothy Storck, the late syndicated newspaper columnist and Pulitzer Prize winner who passed in August 2015, the monetary prize honors the best of the best in commentary/op-ed. The family of the longtime CJA member and her partner, former University of Illinois at Chicago Political Science Professor Dick Simpson, established the annual award in 2017 to honor a columnist sharing Storck’s dedication, impact and commitment to craft.

Headlining the Nov. 11 ceremony will be keynote speaker Jennifer Kho, the new executive editor of the Chicago Sun-Times. Kho, whose previous roles include managing editor of HuffPost and Guardian US, was named the paper’s chief editor in June — becoming the first woman and first person of color to lead the newsroom in its 178-year history. She is also the president of the Journalism & Women Symposium.

Along with her newsroom roles, Kho has served in leadership roles at sustainability consultancy firm DoGoodery, where she was the vice president of journalism and information equity, as well as HuffPost, where served as the senior director of strategic innovation and led the development of new audience engagement, storytelling and revenue models, including membership.

Kho has also conducted journalism research on building healthy news communities, solutions journalism and news habits and gaps in Los Angeles and Chicago. She also serves as an adviser for Bay City News Foundation, The Diversity Pledge Institute and The Pivot Fund as well as a subject matter expert for A Picture’s Worth. The latter is a nonprofit focused on working with journalists, other nonprofits, educators and community partners to rethink and reframe narratives and bridge divides created and sustained by traditional media models.

Hosting the 83rd anniversary event will be Angel Idowu of WTTW. Idowu is the JCS Fund of the DuPage Foundation arts correspondent for the station’s flagship news series “Chicago Tonight” as well as “Black Voices” and “Latino Voices,” weekly platforms that offer diverse perspectives, analysis and features of local Black and Latino communities. A Chicago native, Idowu’s love for the arts extends beyond her work as a journalist. She is also vice president of archives for the Chicago chapter of the National Association of Black Journalists, a mentor with LINK Unlimited Scholars and a developing screenwriter.

Before joining WTTW, Idowu served as an evening producer and weekend reporter for WJTV12, a CBS affiliate in Jackson, Mississippi. She received her master’s degree in journalism from the Medill School of Journalism at Northwestern University and her undergraduate degree from Beloit College.

The awards ceremony, the first to be held in-person since the pandemic began, will also honor the Chicago Reader’s president and publisher, Tracy Baim, with this year’s Lifetime Achievement Award and Chicago Reader staff writer Kelly Garcia with Chicago Emerging Journalist of the Year.

Baim, who was hired to the alt-weekly in 2018, boasts a nearly four-decade career in community media. The co-founder and former publisher of Windy City Times has received numerous LGBTQ community and journalism honors, including the 2013 Chicago Headline Club Lifetime Achievement Award, 2005 Studs Terkel Award and inductions into the NLGJA: The Association of LGBTQ Journalists Hall of Fame and the Association for Women Journalists-Chicago Chapter Hall of Fame.

Garcia, a bilingual investigative journalist, has covered police, politics and racial injustice at the Reader. Prior to joining the Reader in 2021, Garcia freelanced for a variety of news publications in Chicago, including The TRiiBE, South Side Weekly and The Daily Line. She’s a former Civic Reporting Fellow for City Bureau and Summer Reporting Resident for Injustice Watch.

Also being honored are 18 winners of the Sarah Brown Boyden Awards, selected as the best work this year in categories that range from arts and features to investigations, photography and sports. One of those 18 winners will take home a $500 prize awarded to the best of the best. Finalists will be announced next week.

Hussain is an editorial board member and columnist at the Chicago Sun-Times. During her career at the newspaper, she also had stints as an assistant metro editor, criminal courts reporter, general assignment reporter and assistant to columnist Michael Sneed. Before heading to the Sun-Times, Hussain covered education and criminal courts in Lake County for the Chicago Tribune and was assigned the crime, education and City Hall beats for the City News Bureau of Chicago.

Pérez is a national award-winning columnist who has written essays about immigration, addiction and being a Latino gay man. Pérez began working at the Chicago Sun-Times in 2019 as an audience engagement specialist and was promoted to the Editorial Board in less than a year.

He is from Laredo, Texas and has worked at Univision Laredo, the Victoria Advocate and the San Antonio Express-News before coming to Chicago. Pérez is an alumnus of Poynter’s “Power of Diverse Voices” and a board member for the National Association of Hispanic Journalists Chicago chapter.

Sweet is the Washington Bureau Chief for the Chicago Sun-Times. She appears frequently on a variety of outlets as an analyst. Sweet has a master’s from Northwestern University’s Medill School of Journalism and an undergraduate degree from the University of California at Berkeley. She also attended the University of Illinois at Urbana-Champaign. Sweet is a former fellow at Harvard University’s Institute of Politics. Sweet is in Northwestern University’s Medill Hall of Achievement and was named by Washingtonian Magazine as one of the capital’s “50 Top Journalists.”

The 83-year-old CJA annually recognizes excellence in journalism within Illinois and Northwest Indiana through several prestigious award competitions — including the Lifetime Achievement Award and Dorothy Storck Award. The event is regularly attended/viewed by senior leadership, veteran reporters, columnists and editors at regional news outlets, along with political and civic newsmakers.

Join the Chicago Journalists Association for this annual celebration, where we will hear from Kho, Baim, Garcia and the Dorothy Storck Award finalists, and find out the winners of the $1,000 Dorothy Storck Award and $500 Best of the Best Award in the Sarah Brown Boyden competition.

This year’s event is sponsored by Lakeside Bank.