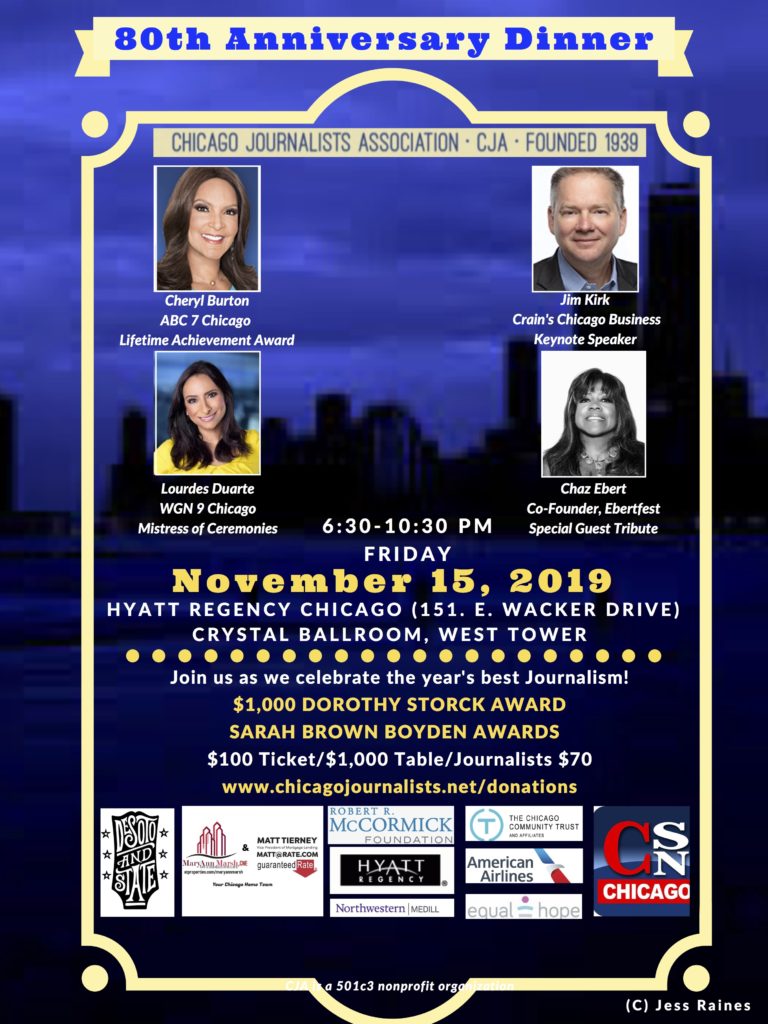 As the oldest organization of journalists in Chicago, the Chicago Journalists Association will present its 80th Anniversary Awards Dinner on FRIDAY, NOVEMBER 15, from 6:30-10:30PM, in the Plaza Ballroom of the Hyatt Regency Chicago, 151 E. Wacker Dr.

A longtime member of the 80-year-old CJA, Storck’s family and her fiancé, University of Illinois at Chicago Political Science Professor Dick Simpson, in 2017 established the annual award to honor a Chicago area Print, Broadcast or Digital columnist sharing Storck’s dedication, impact and commitment to craft.

Also being honored at the dinner are 18 winners of the Sarah Brown Boyden Awards, selected as the best work this year in categories that range from arts, blogs, editorials and features, to investigations, photography, public service and sports. One of those 18 winners will take home a $500 prize awarded to the best of the best.

This year’s Lifetime Achievement Award will be presented to Chicago native and 12-time Emmy Award-winning Anchor/Reporter Cheryl Burton, who helms two of the #1 rated newscasts in Chicago — ABC 7 Eyewitness News at 5 PM and the station’s 10 PM newscast. Burton joined ABC 7 in 1992 as a weekend co-anchor and reporter.

Burton’s reporting has taken her to the heart of Chicago neighborhoods, across the United States, and around the globe. Whether she’s covering the opening of Oprah’s school for girls in South Africa, exposing the plight of one of Illinois’ poorest schools or assessing the aftermath of Hurricane Katrina, Burton brings compelling stories home to Chicago. This veteran of Chicago’s vibrant news landscape is well-respected for her dedication to exposing injustices and bringing the stories of the underprivileged to the forefront.

Burton has received many honors for her work, including the 2009 Procter and Gamble Pioneer Award for community service; the 2008 Vernon Jarrett Par Excellence Award in journalism; and the Thurgood Marshall Award in 2004 and 2005.

Keynote speaker Jim Kirk, who oversees all business and editorial operations as Publisher/Executive Editor of Crain’s Chicago Business, will provide industry perspective and speak on the challenges impacting the future of journalism.

Kirk, who started his journalism career in Chicago at Grocery Marketing magazine and Adweek magazine in the early 1990s, previously served as chief of editorial operations at Crain’s from 2011 to 2012. A native of the Chicago area, he has worked in the Washington bureau of Bloomberg News, overseeing coverage of the White House, Congress and federal agencies. Kirk is a member of the Economic Club of Chicago and has served on the board of the Illinois Press Association and is a past president of Illinois Associated Press Media Editors.

Honored by DePaul University this year with the Distinguished Alumna Award for work that embodies the highest principles of journalism, Duarte started her journalism career as a reporter for Telemundo Chicago, going on to work in news markets throughout the country, including Miami, Indianapolis and Detroit before becoming one of WGN’s top investigative reporters.

Special guest Chaz Hammell-Smith Ebert, CEO of Ebert Digital LLC, will offer an “In Memoriam” tribute. The wife of the late famed movie critic Roger Ebert is publisher of the movie review site Rogerebert.com; produces television and movies, and heads the Ebertfest film festival, now in its 21st year at the University of Illinois at Urbana-Champaign.

A graduate of the Chicago Public Schools’ Crane High School and DePaulUniversity College of Law — both beneficiaries of Ebert scholarships — the civil rights attorney is president of the Roger and Chaz Ebert Foundation; life trustee of the Art Institute, and member of the Alliance of Women Film Journalists. Her work focuses on programs to help break the glass ceiling for women and people of color, and provide education and arts for women, children and families.