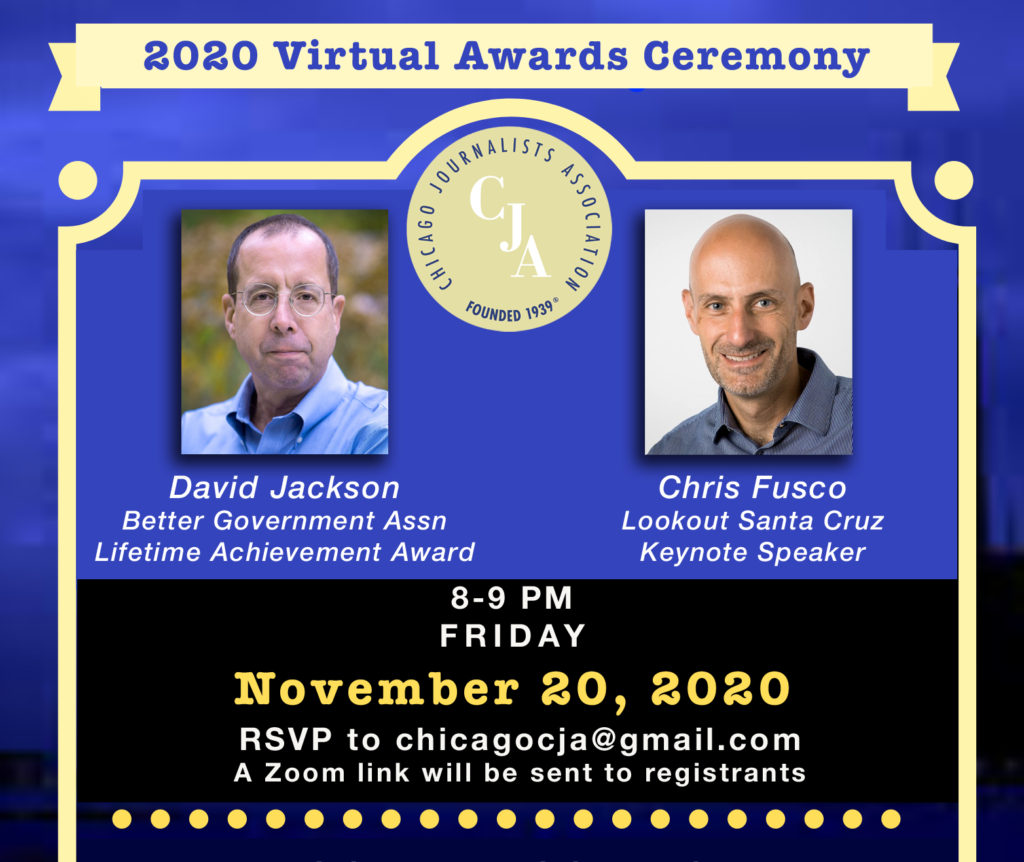 The 81-year-old Chicago Journalists Association, the oldest organization of journalists in Chicago, will present Jackson with the award on FRIDAY, NOVEMBER 20, during the event streaming live via Zoom from 8PM-9PM CST. This year’s event is sponsored by Chase Bank.

CJA’s Lifetime Achievement Award annually honors an Illinois journalist exemplifying the highest levels of career achievement, courage and tenacity. Winners additionally personify the age-old Journalistic mantra of using their gifts of pen and microphone to provide a voice for the voiceless.

Jackson, a Chicago native and Pulitzer Prize winner, is Senior Investigative Reporter at The Better Government Association, joining BGA in August after 29 years at the Chicago Tribune. Jackson’s achievements are without question — a body of work that has consistently led to indictments and legislative reforms, and sparked broad civic conversations on racial inequities and brutal conditions in government programs serving the poor.

Jackson shared the 1999 Pulitzer Prize for Public Service with colleagues at the Washington Post, for a five-part series examining the unusually high rate of police shootings in D.C. — an exposé more pertinent today than ever. So too is the subject matter of his four Pulitzer Prize finalist nominations with the Tribune — in 1996 for investigative reporting; in 2000 for national reporting; and again for investigative reporting in 2012 and 2015.

The Chicago Journalism community was inspired — during this difficult year for Journalism and our nation — by Jackson’s leadership role in the Chicago Tribune Guild’s valiant effort to find a civic-minded owner for the Tribune and its sister newsrooms, resulting in a poignant New York Times op-ed by Jackson and Gary Marx. When the Guild lost that battle, Jackson resigned — to continue his commitment to systems reforms on behalf of society’s most vulnerable at the BGA.

Earlier this year, Jackson established the Gary Marx Journalism Fund — to both honor his longtime investigative reporting partner and trusted newsroom colleague, and cultivate the next generation of Chicago investigative reporters. The fund has given out $100,000 to date — through journalism scholarships at Columbia College Chicago, paid BGA internships, and training through IRE/NICAR.

Fusco, who oversees all editorial operations at the Central California news startup, is a respected veteran of Chicago journalism who up until September was Executive Editor of the Chicago Sun-Times. Fusco joined the Sun-Times as an investigative reporter in 2000, after working as a reporter for the Daily Herald and the Northwest Herald. He was named the Sun Times’ Managing Editor in 2016, Editor-In-Chief a year later, and took the Executive Editor helm in May.

The NOV. 20 event will honor a highly respected Op-Ed Journalist in Illinois/Northwest Indiana with the lauded $1,000 Dorothy Storck Award, recognizing the best Commentary/Op-Ed of the past year. Named for the late syndicated newspaper columnist and Pulitzer Prize-winner who passed in August 2015, the award was established by Storck’s family and her partner, University of Illinois at Chicago Political Science Professor Dick Simpson, in 2017 — to honor a columnist sharing Storck’s dedication, impact and commitment to craft.

CJA saw a record number of Dorothy Storck Award submissions pour in from Newspapers, Magazines, Television and Digital outlets across Illinois/Northwest Indiana during this unprecedented pandemic. Three Finalists will be announced on Thursday, NOV. 12.

Join the Chicago Journalists Association and an audience of national and international purveyors of Journalism for this annual celebration, where we will hear from Jackson and the Dorothy Storck Award winners.

The Chicago Journalists Association is a nonprofit, 501 © 3 organization boasting a storied membership of more than 300 active/veteran print, broadcast and digital journalists, media and communications professionals, associated journalism educators and college journalism students in Illinois/Northwest Indiana. CJA’s core mission is the advocacy and rewarding of journalistic excellence through prestigious Journalism award competitions; professional development of our members through ongoing training and newsmaker forums on industry issues; and support and mentoring of the next generation of journalists, through scholarships.