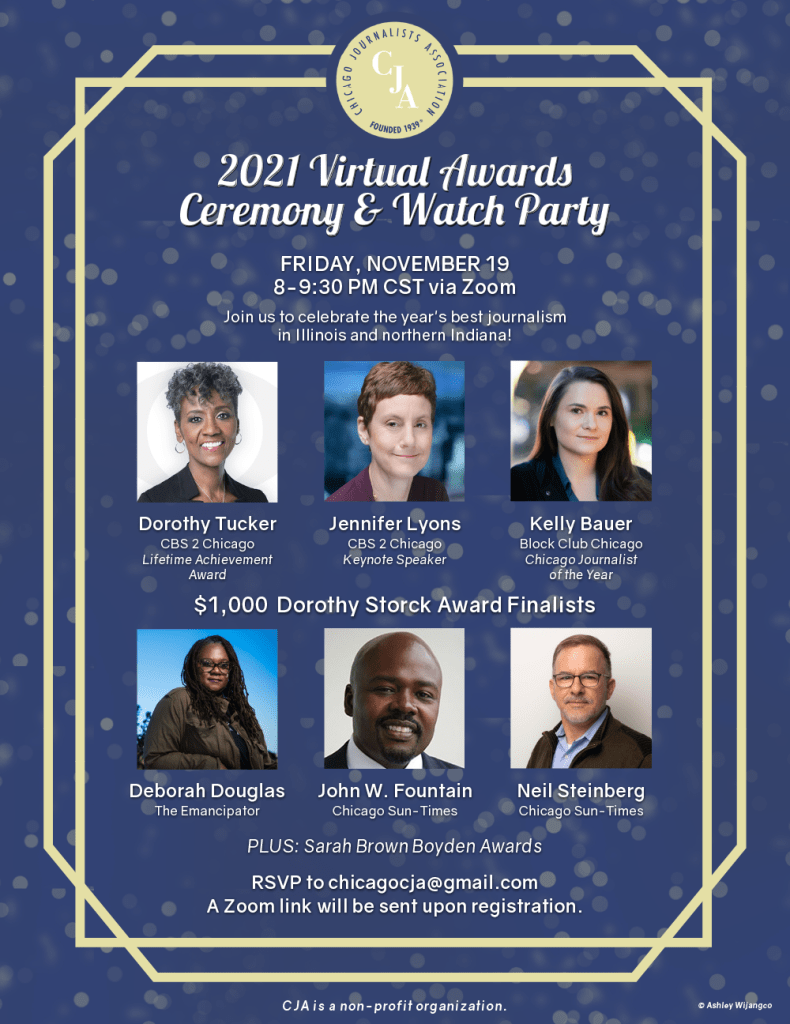 As one of the oldest organizations of journalists in Chicago, CJA will be presenting its 2021 Virtual Awards Ceremony and Watch Party on FRIDAY, NOVEMBER 19, from 8-9:30 p.m. CST via Zoom. For FREE virtual tickets, RSVP to: chicagocja@gmail.com. A Zoom link will be sent upon registration.

CJA’s Lifetime Achievement Award annually honors an Illinois journalist exemplifying the highest levels of career achievement, courage and tenacity. Winners additionally personify the age-old journalistic mantra of using their gifts of pen and microphone to provide a voice for the voiceless.

This year’s Lifetime Achievement Award will be presented to veteran Chicago journalist Dorothy Tucker. The Emmy Award-winning reporter was born and raised in the city’s Lawndale and Austin neighborhoods and has worked for CBS 2 Chicago since 1984. For decades, Tucker has brought a keen investigative eye to both evergreen and breaking news stories across the Chicago area.

Most recently, Tucker, who currently works with CBS’ Investigator team, won two regional Edward R. Murrow Awards, one of which recognized her work that covered how Black Chicagoans were dying from COVID-19 at alarming rates. Her investigative work was also instrumental in earning the CBS 2 Chicago team a national Murrow award for overall newsroom excellence. CJA’s recognition will be her first Lifetime Achievement Award.

Tucker is also president of the National Association of Black Journalists (NABJ). During her first term, Tucker remained committed to her efforts to diversify newsrooms at every level and mentor the next generation of Black journalists. Earlier this year, she was re-elected to a second presidential term with overwhelming results: 532-111 in Tucker’s favor. She also serves as a board member for the Chicago chapter of the NABJ. She’s a Northwestern University alumnus and a current member of the Northwestern University Leadership Circle.

For the first time since 2015, the Nov. 19 event will also mark the highly-anticipated return of another prestigious CJA honor: Chicago Journalist of the Year. The award recognizes a local journalist who has produced exemplary work in the past year. This year’s recipient is Kelly Bauer, breaking news editor at Block Club Chicago.

Bauer will be recognized not only for her prolific body of work since the pandemic began — she has penned more than 1,600 stories and attended 300+ news conferences since March 2020 — but also for her noteworthy March 2021 investigation that unveiled how an executive with the West Side’s Loretto Hospital was inappropriately administering highly desirable vaccine doses to non-eligible recipients through a “VIP” vaccination event.

A longtime member of the 82-year-old CJA, Storck’s family and her partner, University of Illinois at Chicago Political Science Professor Dick Simpson, in 2017 established the annual award to honor a Chicago area print, broadcast or digital columnist sharing Storck’s dedication, impact and commitment to craft.

Also being honored at the awards ceremony are 14 winners of the Sarah Brown Boyden Awards, selected as the best work this year in categories that range from arts and features to investigations, photography and sports. One of those 14 winners will take home a $500 prize awarded to the best of the best. Sarah Brown Boyden Award finalists will be announced the week of the awards ceremony.

Join the Chicago Journalists Association and an audience of national and international purveyors of journalism for this annual celebration, where we will hear from Tucker, Bauer and the Dorothy Storck Award winners. For FREE virtual tickets, RSVP to: chicagocja@gmail.com. A Zoom link will be sent upon registration.