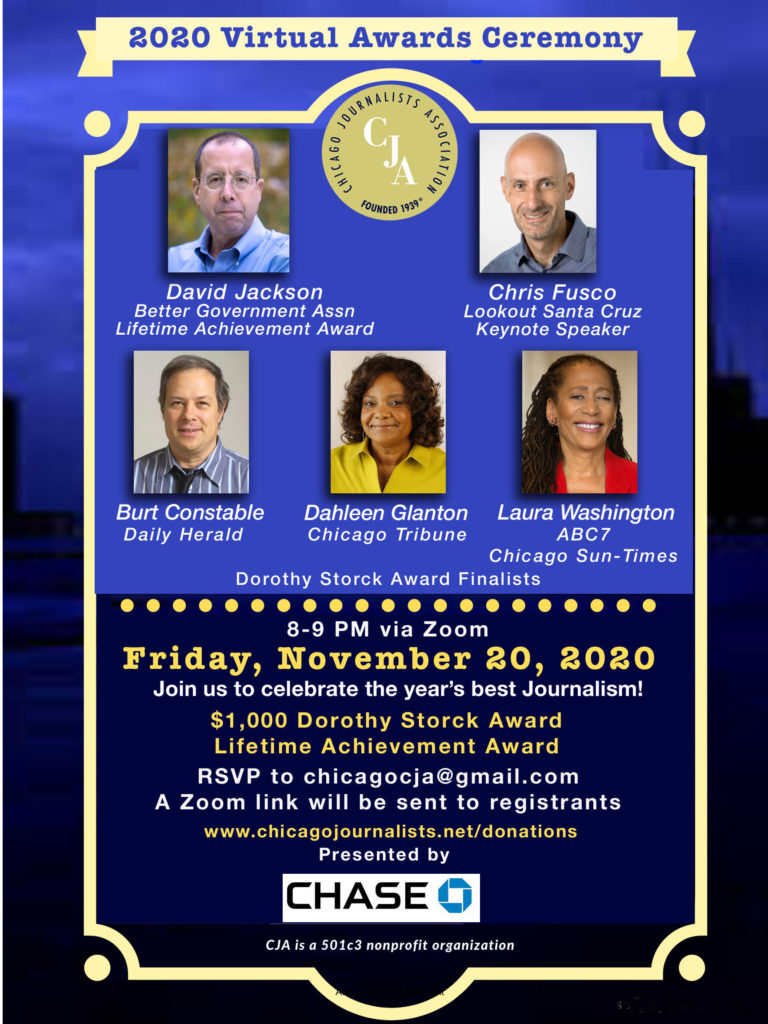 Only one will take home a $1,000 prize at CJA’s 2020 Virtual Awards Ceremony, being held FRIDAY, NOVEMBER 20, streaming live via Zoom from 8PM-9PM CST. This year’s event is sponsored by Chase Bank.

Named for Dorothy Storck, the late syndicated newspaper columnist and Pulitzer Prize winner who passed in August 2015, the monetary prize honors the best of the best in Commentary/Op-Ed. The family of the longtime CJA member and her partner, University of Illinois at Chicago Political Science Professor Dick Simpson, established the annual award in 2017 to honor a columnist sharing Storck’s dedication, impact and commitment to craft.

The Chicago Journalists Association saw a record number of Dorothy Storck Award submissions pour in from Newspapers, Magazines, Television and Digital outlets across Illinois/Northwest Indiana during this unprecedented pandemic year.

Jackson, who joined BGA in August after 29 years at the Chicago Tribune, shared the Pulitzer Prize for Public Service with colleagues at the Washington Post in 1999, and earned four Pulitzer Prize finalist nominations with the Tribune — in 1996 for investigative reporting; in 2000 for national reporting; and again for investigative reporting in 2012 and 2015. His body of work has consistently led to indictments and legislative reforms, and sparked broad civic conversations on racial inequities and brutal conditions in government programs serving the poor.

Headlining the event will be Keynote Speaker Chris Fusco, a respected veteran of Chicago journalism who is now Founding Executive Editor of Lookout Santa Cruz, the flagship news outlet of Lookout Local, Inc., a network of local news and information sites recently launched by longtime industry analyst and Newsonomics Founder Ken Doctor. Executive Editor of the Chicago Sun-Times up until September, Fusco will provide industry perspective and speak on challenges impacting the industry.

Since joining the Herald in 1981 from the Washington (Iowa) Evening Journal, Constable has held positions from police reporter to copy editor. As a reporter, he covered beats from general assignment and sports to courts and crime, before becoming a full-time columnist in 1988, alongside legendary Chicago Columnist Jack Mabley.

Constable, who previously worked for the Lafayette (Ind.) Journal & Courier, grew up on a farm in Goodland, Ind., where he learned how to plant, cultivate, rotary hoe and be fearful of cows. He holds a B.A. in Journalism from Northwestern University’s Medill School, and is the recipient of myriad awards, including CJA’s 2019 Sarah Brown Boyden Award for Best Feature. His work covering and interpreting tragedies has earned numerous citations, but he considers his biggest accomplishment being the first person to tout Barack Obama as future president way back in March of 2003.

Since joining the Tribune in 1989 from the Los Angeles Times, Glanton has held positions ranging from associate metro editor to national bureau chief in Atlanta. As a reporter, she covered some of the biggest stories of the past two decades, including Hurricane Katrina, President Barack Obama’s 2008 election and military families during the Iraq War. As a columnist, she encourages dialogue on topical issues such as race, politics and violence.

Recipient of the Studs Terkel Award and Peter Lisagor Award, she has earned myriad other awards from entities including the National Headliners Club, National Association of Black Journalists, Illinois Associated Press Media Editors and Illinois Press Association. She won the American Society of News Editors Mike Royko Award for Commentary/Column Writing in 2018, and was a 2017 finalist for the Pulitzer Prize in Commentary, cited by the Pulitzer Prize Board “for bold, clear columns by a writer who cast aside sacred cows and conventional wisdom to speak powerfully and passionately about politics and race in Chicago and beyond.” She holds a B.A. in Journalism from the University of Georgia.

Washington, a former mayoral press secretary who served under the late Mayor Harold Washington, was Publisher/Editor of the nationally recognized investigative news outlet The Chicago Reporter from 1990 to 2002. She was previously an investigative unit producer at CBS-2-Chicago, and a correspondent with WTTW-TV’s “Chicago Tonight.” She has written an op-ed column for the Chicago Tribune. Her Sun-Times column has been published since 2001. From 2003 to 2009, she served as Ida B. Wells-Barnett University Professor at DePaul University; and as Visiting Fellow at the University of Chicago’s Institute of Politics in 2015 and 2019.

Specializing in African-American affairs, local and national politics, social justice, race and racism, her myriad awards including two Emmys, the Studs Terkel Award, Peter Lisagor Award and the YWCA’s Racial Justice Award. She holds a B.A. and M.A. in Journalism from Northwestern University’s Medill School, and was a founding inductee of Medill’s Hall of Achievement, as well as the Chicago Women’s Journalism Hall of Fame. Newsweek named her among its “100 People to Watch” in the 21st Century, and she serves on several boards, including The Field Museum and Block Club Chicago.

The Dorothy Storck Award is unique, in that unlike other award competitions, it annually honors two second-place winners, as the work of these journalists is too critical to judge slight differences in the style in which they give voice to the voiceless. Join the Chicago Journalists Association and an audience of national and international purveyors of Journalism for this annual celebration, where we will hear from Jackson and the Dorothy Storck Award finalists, and learn the winner of the $1,000 prize.

The Chicago Journalists Association is a nonprofit, 501 © 3 organization boasting a storied membership of more than 300 active/veteran print, broadcast and digital journalists, media and communications professionals, associated journalism educators and college journalism students in Illinois/Northwest Indiana. CJA’s core mission is the advocacy and rewarding of journalistic excellence through prestigious Journalism award competitions; professional development of our members through ongoing training and newsmaker forums on industry issues; and support and mentoring of the next generation of journalists, through scholarships.