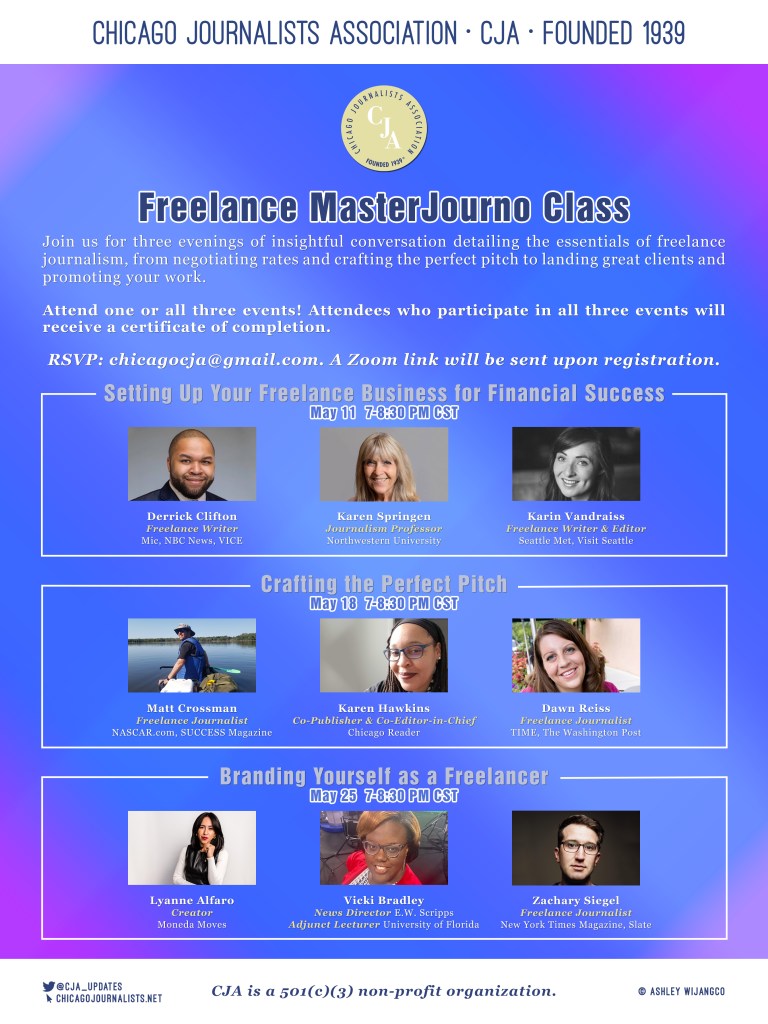 The event series will be a FREE, three-part virtual training program detailing essential tools and strategies for individuals interested in becoming full-time freelance journalists. The first session, “Setting Up Your Freelance Business for Financial Success,” will discuss the business and financial side of freelancing, touching on topics such as negotiating rates and receiving timely payments. The second session, “Crafting the Perfect Pitch,” will focus on crafting successful pitches for local and national publications. The third session, “Branding Yourself as a Freelancer,” will highlight the importance of marketing oneself and creating the perfect online presence.

The conversations will take place via Zoom on three consecutive Wednesdays – May 11, 18 and 25 – from 7-8:30 p.m. CST. Each panel will feature both local and national award-winning journalists and editors, who have freelanced their way to success, as well as social media and personal branding experts. Those who attend all three classes will receive a certificate of completion, listing the skills acquired throughout the sessions.

To reserve a spot in one, two or all three classes, RSVP to chicagocja@gmail.com.

Lyanne Alfaro: Lyanne Alfaro tells stories about what’s next in the world of technology, business and entrepreneurship. She is especially passionate about exploring the Latino influence in the world of business, which she speaks about via newsletter, podcast and on her platform, Moneda Moves. She is an award-winning journalist, having reported in national outlets including CNBC, NBC Latino, Business Insider and Millie Magazine. Most recently, she was supervising producer at Nasdaq, where she covered newly listed companies at the stock exchange and business leaders of tomorrow. Today, she is a developer relations program manager and service lead at HOLA Chicago, Google’s Latinx ERG.

Vicki Bradley: Vicki Bradley is a news leader with more than a decade of news producing and leadership experience in newsrooms in North Carolina, Georgia, Texas and Florida. Since July 2019, she has led the WTXL ABC 27 newsroom in telling stories that impact communities in North Florida and South Georgia. Bradley also works as an adjunct lecturer for the University of Florida teaching personal branding. Her professional accomplishments include being an Emmy-nominated journalist. In 2021, Bradley was inducted into the Winston-Salem State University Forty Under 40 class. That same year she also received the Heart of Gold medal from the Association of Fundraising Professionals for her work with the Second Harvest of the Big Bend.

Matt Crossman: Matt Crossman writes about travel, adventure, NASCAR and whatever other topics he can persuade editors to buy stories about. He lives in St. Louis with his wife and two daughters.

Karen Hawkins: Karen Hawkins is co-publisher and co-editor-in-chief of the Chicago Reader, and founder of Rebellious Magazine for Women and the Feminist Media Foundation. She is also co-host of the podcasts Of Course I’m Not OK and Feminist Erotica. She is an award-winning reporter and editor whose journalism background includes positions at The Associated Press, the Windy City Times and the Milwaukee Journal Sentinel. She is a national board member for NLGJA: The Association of LGBTQ+ Journalists and AAN: The Association of Alternative Newsmedia. Hawkins lives on the North Side with her two elderly cats.

Dawn Reiss: ​​Dawn Reiss is a Chicago-based journalist who has written for The Washington Post, The New York Times, TIME, The Atlantic, Reuters, USA Today, U.S. News & World Report, Shondaland, AFAR, Travel + Leisure, AFAR, Fortune.com, Chicago Tribune, Chicago magazine and Crain’s Chicago Business, among many other outlets. She earned a Peter Lisagor Award for Best Breaking News online for her trial coverage of former Illinois governor Rod Blagojevich for TIME and Time.com, and she served as president of the Chicago Headline Club.

Zachary Siegel: Zachary Siegel is a freelance journalist living in Chicago. His work has been published in New York Times Magazine, The Atlantic, Slate, WIRED, Scientific American, Politico Magazine and more. Currently, he’s a journalism fellow at Northeastern University’s Health In Justice Action Lab working on the Changing The Narrative project. He co-writes the Substance newsletter on Substack.

Karen Springen: Karen Springen teaches undergraduate and graduate reporting and writing classes at Northwestern University’s Medill School of Journalism, Media, Integrated Marketing Communications. Previously, she spent 24 years at Newsweek, where, as a correspondent, she reported on everything from serial killer Jeffrey Dahmer to the Hunger Games. Over the years, she has published pieces in the Stanford alumni magazine, the American Library Association’s Booklist, Publishers Weekly, Reader’s Digest, School Library Journal, Chicago magazine, Marie Claire, menshealth.com, goodhousekeeping.com and many other publications. She received her master’s in journalism from Columbia University and her bachelor’s degree in international relations from Stanford University, where she was editor-in-chief of The Stanford Daily.

Karin Vandraiss: Karin Vandraiss is a Seattle-based freelance writer and editor with a decade of experience in journalism and custom content. She has bylines in more than a dozen magazines, worked in the nonprofit space as lead writer for a global education organization, and has managed multiple publications and branded content initiatives. Today, she largely writes on mental health and wellness, social impact and travel. Vandraiss also works with private clients and mission-driven organizations on editorial projects, spanning grant writing to ghostwriting, and edits fiction on the side.