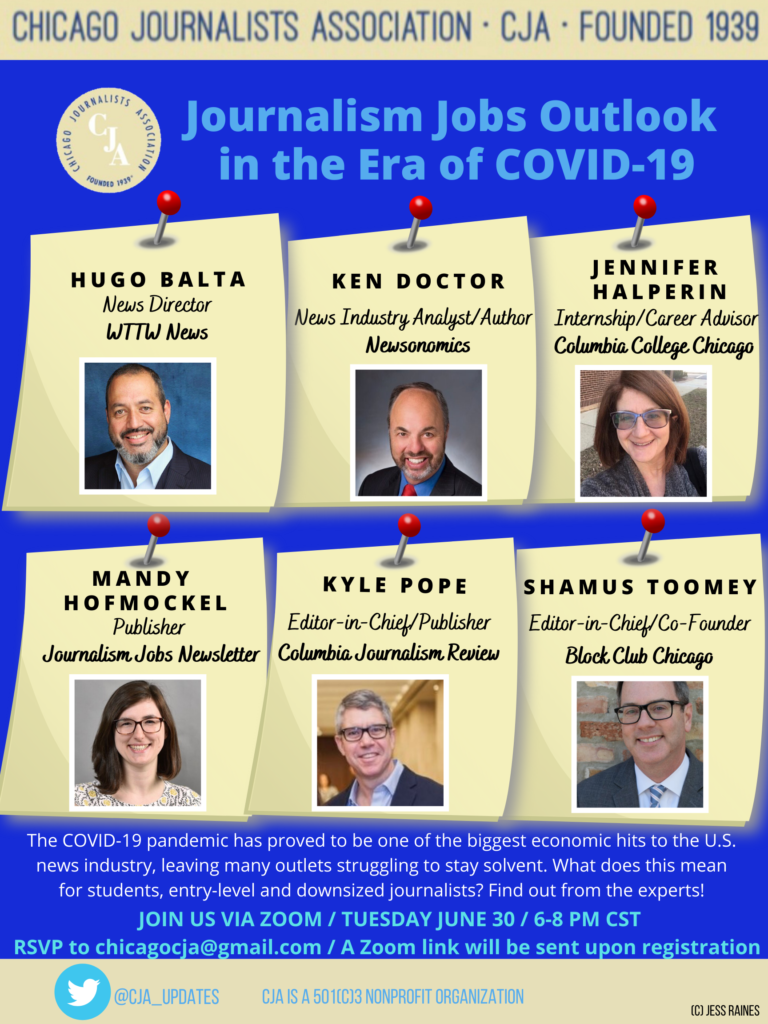 Already suffering from reader and viewer migration from print and broadcast to online — with attendant decline in advertising — coronavirus left many outlets struggling to stay solvent. It’s meant layoffs of staff, furlough of others, reduced workweeks, slashing of salaries and canceling of some outlets’ print editions.

What does this all mean for current students/recent grads from J-Schools, entry-level and downsized journalists? We’ll find out from the experts!

Join us via Zoom TUESDAY, JUNE 30 from 6-8 PM CST for a panel discussion: “Journalism Jobs Outlook in the Era of COVID-19.”

RSVP to chicagocja@gmail.com! A Zoom link will be sent upon registration.

Learn more about our featured panelists:

Hugo Balta is the News Director of WTTW News, where he leads, plans, reports, produces and edits news content and engagement for WTTW’s platforms, and serves as Executive Producer of the station’s flagship news program, “Chicago Tonight.” Balta is a two-time president of the National Association of Hispanic Journalists and the only president to serve a second term in its 36-year history.

Balta previously served as Senior Producer at MSNBC, overseeing editorial and production of high visibility live television shows, and was a member of the NBC/MSNBC Editorial Board. He has also held production and editorial leadership positions at the Disney|ABC Television Group, ESPN, Telemundo, WCSB-TV in New York, and WTJV-TV in Miami.

Ken Doctor is a news industry analyst whose work focuses on the disruption and transformation of the news business in the digital age. He writes the popular “Newsonomics” column for the Nieman Journalism Lab that followed his 2010 book, “Newsonomics: Twelve New Trends That Will Shape the News You Get.”

Doctor previously spent 21 years with Knight Ridder, the nation’s second largest newspaper publisher, including as Managing Editor of the St. Paul Pioneer Press and Vice President of Knight Ridder Digital. He coined the term “newsonomics” to describe the concept of money flow as print and broadcast news outlets transition to digital formats.

Jennifer Halperin is the Internship and Career Advisor at Columbia College Chicago, where she has bolstered the journalism internship program for the past 13 years, and taught journalism courses, from 2005 to 2013.

Halperin’s journalism career includes reporter or editor positions at such publications as the Columbus Dispatch, Illinois Issues, and Daytona Beach News-Journal, and she continues as a stringer for Mergermarket, a London-based financial news service.

Mandy Hofmockel is the newly named Managing Editor of Audience at Hearst Connecticut Media Group, after previously spending nearly seven years at Newsday Media Group, four as Deputy Editor of News. She is a regular contributor of news and analysis on the U.S. Journalism Jobs outlook at The Poynter Institute, the global leader in journalism education. Hofmockel also publishes the weekly newsletter, “Journalism Jobs and a Photo of My Dog.”

Kyle Pope is Editor-in-Chief and Publisher of the Columbia Journalism Review, the venerable, 59-year-old industry magazine published by the Columbia University Graduate School of Journalism.

Previously, Pope oversaw a chain of eight Manhattan weekly newspapers as Editor-in-Chief of Straus News, was Editor-In-Chief at the New York Observer, and Deputy Editor of Conde Nast Portfolio magazine. Prior to that, he spent 10 years as an editor and reporter at The Wall Street Journal.

Shamus Toomey is the Editor-in-Chief and Co-Founder of the startup neighborhood news website, Block Club Chicago. Under his leadership, Block Club has grown from an initial team of eight to 15 in two years, expanding coverage to multiple areas of Chicago.

Toomey previously served as Managing Editor of DNAinfo Chicago, the award-winning news site previously funded by billionaire Joe Ricketts and shuttered in 2017. Before that, he was Metro Editor at the Chicago Sun-Times, where he supervised the team that won the 2011 Pulitzer Prize for Local Reporting.

2 comments on “CJA to Hold Virtual Panel: Journalism Jobs Outlook in the Era of COVID-19”